Secretary-General of the Chaipattana Foundation Presided over the Conference to Launch an Exclusive Documentary “The Benefits and Happiness of the Land” at Siam City Hotel, Si Ayuthaya Road, Bangkok 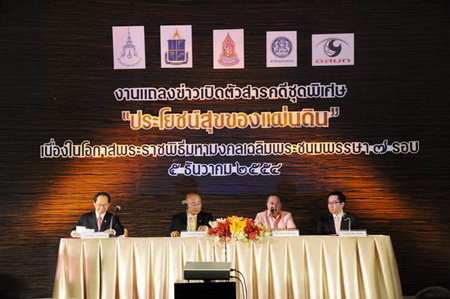 On 9 June, 2011, Dr. Sumet Tantivejkul, Secretary-General of the Chaipattana Foundation, presided over the press conference to announce the launch of an exclusive documentary series entitled “The Benefits and Happiness of the Land” in honour of His Majesty the King at Siam City Hotel in Bangkok.

The documentary project is the collaboration between the Chaipattana Foundation, Office of His Majesty’s Principal Private Secretary, Office of the Royal Development Projects Board(RDPB), Bureau of the Budget, and MCOT Public Company Limited, and was produced in honour of the auspicious occasion of His Majesty the King’s 7th Cycle Birthday Annivesary on 5 December, 2011.

The documentary series “The Benefits and Happiness of the Land” depict His Majesty the King’s stories and the principles behind the royal development projects in order to raise the audience’s appreciation for his work and to allow them to be part of his experiences. The Knowledge gained from the documentary can also be adapted to benefit them in everyday life.