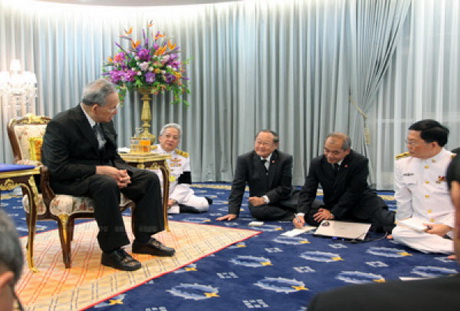 On 5 September, 2011, His Majesty the King graciously granted permission to Dr. Sumet Tantivejkul, the Honorary Chairperson of the Hydro and Agro Informatics Institute, to accompany a delegation from the Hydro and Agro Informatics Institute, Ministry of Science and Technology to an audience with him at the 14th floor meeting room of the Chalermprakiat Building, Siriraj Hospital. On this occasion, the delegation presented His Majesty with a progress report on the activities of the Institute, and received royal recommendation for further activities to improve people’s livelihoods. In addition, His Majesty gave his remarks on sufficiency economy to be a guideline for the Institute.