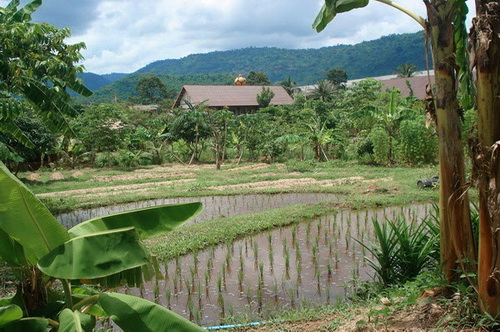 In 1989, the Chaipattana Foundation bought a piece of land covering an area of 6 acres near Khun Dan Dam in Nakhon Nayok Province. Later the Vajiravudh College Alumni Association under the Royal Patronage was given permission to use this piece of land as a learning project for His Majesty King Bhumibol’s Concept of Development. This led to the planning of a recreational centre to demonstrate the royal concept and theories of agricultural development, environmental improvement, and natural resources conservation.

In 2002, the Vajiravudh College Alumni Association was granted permission by Her Royal Highness Princess Maha Chakri Sirindhorn, the Executive Chairperson of the Chaipattana Foundation, to commence the construction of the centre. Later, the centre was especially named by Her Royal Highness as Bhumirak Dhamachart. She also graciously presided over the Opening Ceremony in June 2008.