The History of Chaipattana Foundation 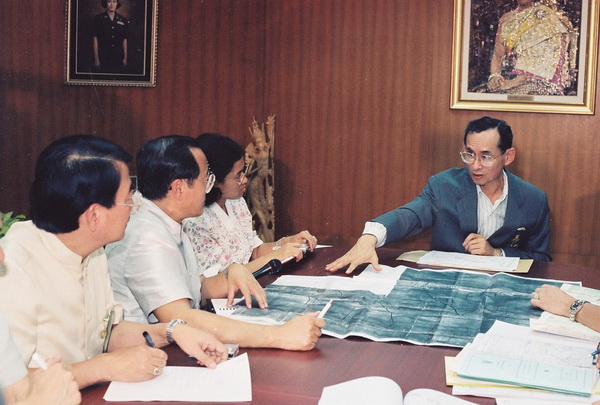 “The Chaipattana Foundation is a non-governmental organisation. All committee members have freedom to consider and initiate work activities. The King is the Honorary President of the Foundation. We are public-spirited developers joining to contribute to national and social development. Our joy comes when such progress is realized. That is truly ‘Chaipattana’ or the Victory of Development.”

His Majesty the King’s royal speech delivered on July 11, 1996
2nd Committee Meeting of 1996
at the Chaipattana Building, Chitralada Palace

His Majesty King Bhumibol Adulyadej granted an initiative for the establishment of the “Chaipattana Foundation,” of which he acts as the Honorary President. He also appointed Her Royal Highness Princess Maha Chakri Sirindhorn to be the Executive Chairperson. Due to regulatory requirements and budget constraints faced by government agencies, His Majesty envisaged a foundation that would serve to provide prompt, timely and necessary responses to problems affecting the Thai people through various development projects.

On 14 June, 1988, The Chaipattana Foundation was officially registered as a juristic entity under the registration number 3975. The registration was proclaimed in the Royal Gazette on 12 July, 1988. The Ministry of Finance pronounced the Chaipattana Foundation a charity organization on 8 September, 1988. This was made public in the Royal Gazette on 16 September, 1988.