His Majesty the King has always placed a high regard on the deteriorating conditions of environment caused by the imbalance of modern development.  In the 1990s, the worsening water pollution had called for several royal initiatives to alleviate the problem. In response to His Majesty’s concern and initiatives for water pollution, the Chaipattana Foundation began its efforts to develop wastewater management, garbage disposal and waste material reutilization.

The foremost royal initiative for wastewater management is His Majesty the King’s invention of the Chaipattana Aerator. 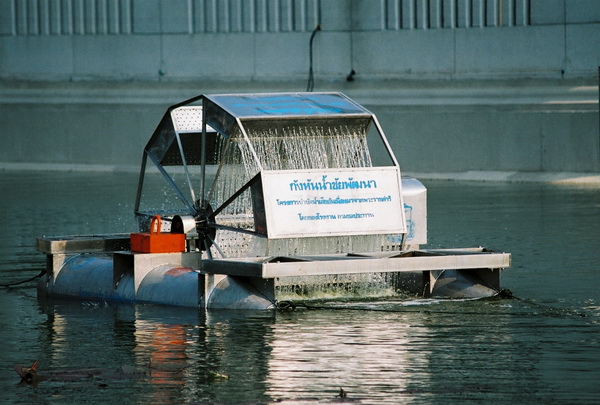 “We had it put together into what we call the Surf Boat because it resembles Surf Boats with a rotating propeller. This Surf Boat produced good results. The 1-2 horsepower engine scoops water up and sprinkles it back over the surface to introduce oxygen into the wastewater.”

His Majesty the King’s Remarks

The water oxidation by mechanical aerator to increase pollution-destroying bacteria

His Majesty the King requested that a mechanical aerator device be built in the hope of lightening the government’s burden in managing water pollution. He later presented the design of an aerator to the Royal Irrigation Department in 1988 for further development. The aerator serves as a model for a simple and low-cost mechanical device to alleviate wastewater based on His Majesty’s Concept of Self-Reliance. It was also intended to forge a sense of urgency for water quality improvement and stress the need for public participation in this process.

The Chaipattana Aerator is a floating buoy that rotates slowly to pump oxygen into wastewater. It was patented under the name of His Majesty in 1993. The Chaipattana Foundation has collaborated with the Royal Irrigation Department in developing as well as utilizing the aerator to treat wastewater in Thailand. Thus far, the Chaipattana Aerators have been installed in various locations such as Wat Bavornives Vihara, Wat Thepsirintharawas, Phra Mongkutklao Hospital, Bang Khae Residential Aged Care, and Rama IX Golden Jubilee Temple in Bangkok, and Nong Sanom swamp in Sakon Nakorn Province. Along with the Chaipattana Aerator, water hyacinth cultivation has also been developed as a natural water filter to tackle the problem of wastewater. 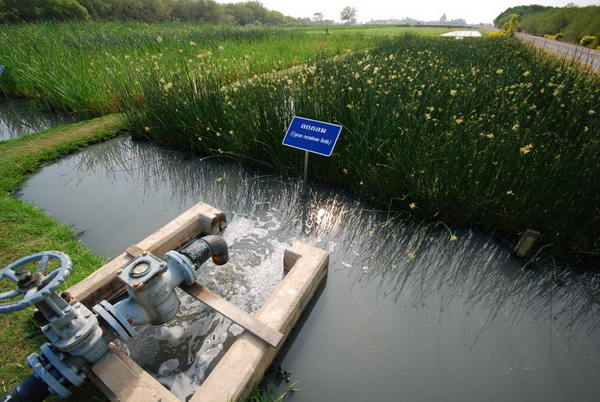 At the LERD Project, study and research had been conducted to seek methods for managing wastewater and garbage, and restoring the mangrove forest. The result was the development of four technological systems, including:

The LERD Project has improved its wastewater treatment and garbage management methods to be more effective and suitable for the environment. It also helps to prevent wastewater collected from the municipal area from flowing into the Phetchaburi River, which in turn restores the balance of nature. The LERD Project currently serves as a model for environmental improvement and conservation.

Besides conducting study and research, the LERD Project serves as a learning center for wastewater management and mangrove forest conservation. It regularly accommodates field education trips for schools, academic institutes as well as the general public. The scenic location next to a mangrove forest and the sea has also established the LERD Project to be a famous eco-tourist attraction and an ideal destination for bird watching activities.

Vetiver: A Miracle Grass
A Living Barrier for Soil Degradation and Erosion

“Planting vetiver grass is a new way of thinking. The planting is to be carried out casually, but the results are good.”

His Majesty the King 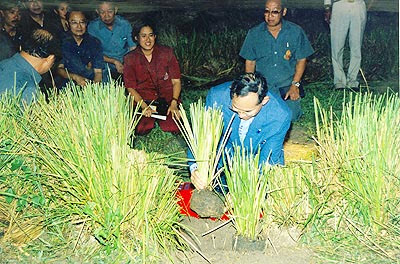 Growing vetiver grass for soil and water conservation had not been a general practice in Thailand until His Majesty the King brought recognition to such value and capacity in 1991. He granted an initiative to the Chaipattana Foundation to carry out a study that would establish the capacity of growing vetiver grass to preserve soil and water. The growing process of the vetiver grass is simple and economical, and is therefore suitable for Thai farmers. It also does not require great care after planting. 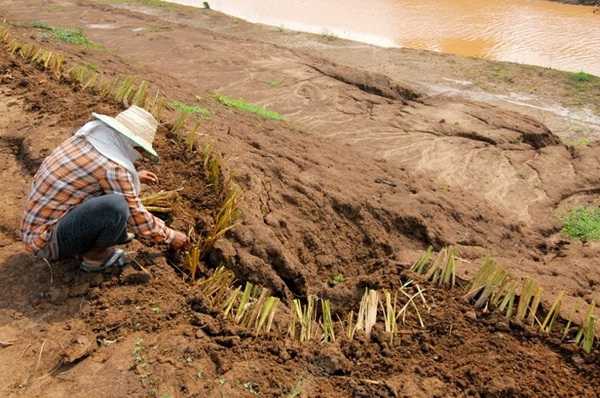 The benefits of vetiver grass and its capacity are evident. Importantly, the grass prevents the collapse of road shoulders on highland areas such as those in Northern Thailand. It has proved to be effective for rehabilitating deteriorated and hard-pan soil as illustrated at the Deteriorated Soil Rehabilitation Project at Khao Cha-ngum in Ratchaburi Province and the Huai Sai Royal Development Study Center in Phetchaburi Province, respectively.