“Water levels and drainage in Bangkok should be managed according to local conditions. I suggest two plans for such management: The first is to be adopted in the monsoon to prevent flooding, while the second plan is designed to deal with water pollution in the dry season by flushing it out from the canals. Both plans should be based on the force of gravity to reduce expenses spent on the control of water levels in the canals.”

Water from the Chao Phraya River and elsewhere flows into Bangkok through the Bang Khen, Bang Sue, Saensaep, Thewet, Bang Lamphu or any other canals, and flows through connecting canals back out to the River further downstream. With appropriate planning of water flows to and from the city, polluted water in Bangkok is diluted and most pollutants are flushed out. This efficiently alleviates pollution in canals during the dry season. 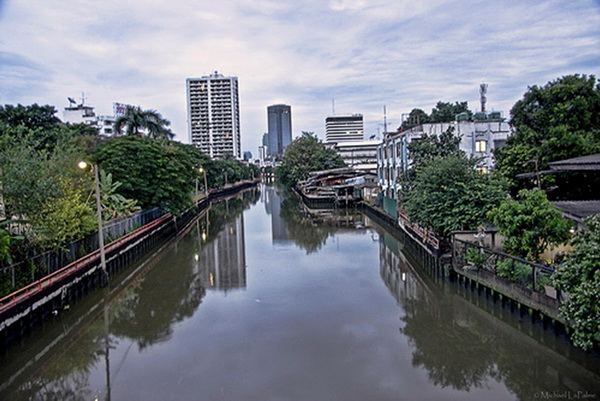 The Prem Prachakon canal was designed to receive water from the Chao Phraya River before being distributed to other canals in Bangkok to reduce water pollution through water dilution. His Majesty requested that the canal be dredged and weeds removed so that it can serve as the main canal in reducing water pollution.

The Prem Prachakon canal was designed to receive water from the Chao Phraya River before being distributed to other canals in Bangkok to reduce water pollution through water dilution. His Majesty requested that the canal be dredged and weeds removed so that it can serve as the main canal in reducing water pollution.

“The concept is not too difficult; we just move the pollutants like the heavy metals. There are ways to do this. Then we can introduce air into the water to cleanse it.  Maybe this is not even necessary. Then the water can be distributed into ponds, or placed in grasslands to make them grazing lands. A part of this area could be used for growing crops, planting trees.”

His Majesty the King, speaking of the Laem Phak Bia Environmental Research and Development Project 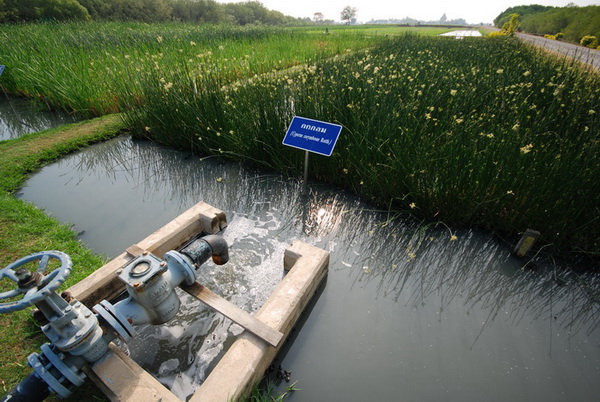 Based on His Majesty’s initiative, collaboration between various relevant public agencies was set up to carry out the work implementation by

1)   Collecting wastewater from nearby communities in the province and let it flow into the pumping station area.  At this station and before being pumped, the water is rid of garbage, plastic bags, fabrics, banana leaves, wood debris and large suspended solids of varied sizes for the purpose of reducing water pollution and workload of the pump. This constitutes primary sedimentation pond, which is expected to reduce pollution by 40 %.

2.1) The Main Treatment System (or the Lagoon Treatment) using 5 ponds for the sedimentation, oxidation and polishing process before the water is drained into the mangrove forest. At this final stage, the water quality will be closely examined.

2.2)  The Secondary Treatment System, consisting of:

2.2.1) A constructed wetland system, which is planted with various species of aquatic plants that thrive in stagnant and polluted water and are lodged in the soil by a widely spread root system.

2.2.2) A grass-filtration system, which is planted with grasses including Napier, Vetiver, Zoysia ammura and Brachiaria mutica. These grass fields periodically receive water from the polishing pond of the Lagoon Treatment System and hold it for 1-2 weeks each time, until the water is cleaner.

2.2.3) A mangrove forest system, which is an area of 30 rai of white and red mangrove species, mixed together to resemble a natural forest. The water is let to flow through this area, thus its quality will be treated.

The scoops attached to the aerator frames work to lift wastewater, resulting in maximum contact between the water and air, which allows oxygen to dissolve quickly into the water. When the scoop plunges below the water’s surface, a pocket of air is created in the scoop until it is fully submersed. This enhances the effectiveness of oxygen transfer.

The aerated water is then evacuated by the motion of the scoop and the rocking of the buoy, which combine to add oxygen to water below the surface. Aeration agitation and the control of flow direction thus occur simultaneously.

The machine is capable of treating water pollution with BOD of 250 milligrammes per litre at a rate of 600 cubic metres per day, and is effective in reducing BOD by more than 90 %. It is also cost-effective, at only 96 satang per cubic metre, or in terms of pollutants removed, 3.84 baht per kilogramme of BOD. 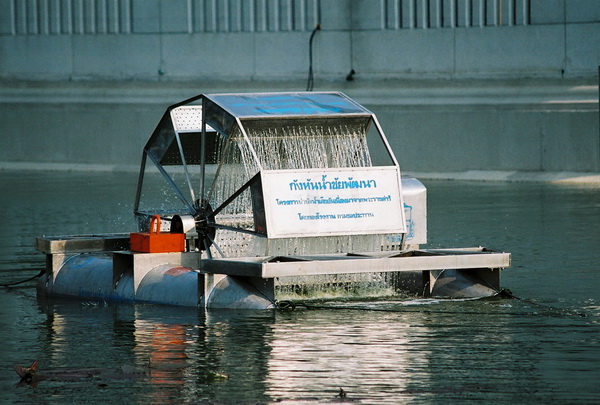 His Majesty has devoted a lot of time to seeking solutions to flood problems in Thailand. His concern for the people in this regard has led to various methodologies according to local conditions, including:

In applying this ancient practice to modern flood prevention, the dikes should be built to a size suitable for the job and at an appropriate distance from the bank of the canals. This will prevent water overflowing the banks from undermining the dikes.

This idea is for diverting all or part of the floodwaters. Ditches or canals are built to link with existing waterways so that floodwaters are drained away. Alternatively, these diversion ditches can be linked directly to the sea. 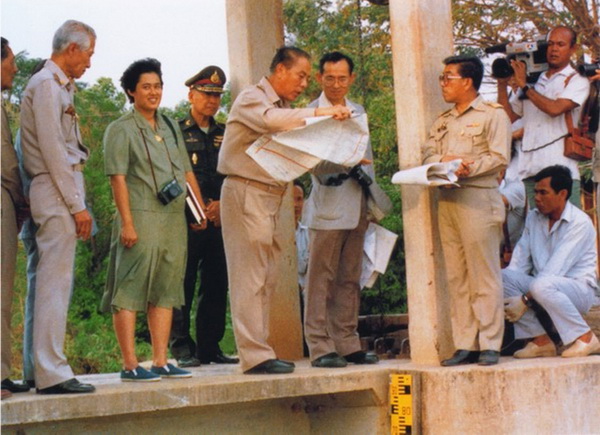 Building reservoirs is another important component of His Majesty’s work to solve flood problems. The reservoirs are to keep the water out of areas frequently inundated by heavy flooding.

5. The Monkey’s Cheeks Project for Bangkok

The low-lying flat terrain of Bangkok causes floodwaters to drain from the area slowly.  Many canals have a small downhill gradient while others are silted or filled up.  Weeds and other items block the flow of water. These are some of the factors why Bangkok and the surrounding areas have been subject to heavy flooding for many years.

His Majesty devised a flood management system for Bangkok which he called Kaem Ling (Monkey’s Cheeks).

“A monkey will, if you throw a banana, open its mouth and swallow the banana whole and keep it in his cheek. A monkey can keep almost an entire bunch of banana inside its cheeks. Only later will the monkey take the bananas out, chew and swallow them.”

Three principles to which the Kaem Ling Project has successfully adhered include:

5.1)  Identifying sites to serve as storage reservoirs and divert water into them.

5.3)  Draining water out of these reservoirs continually. 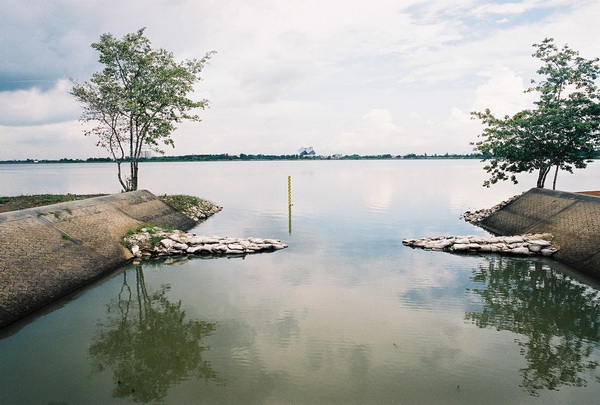 How the Kaem Ling Project works

The water is diverted from Northern Bangkok to be stored in large canals near the sea. This canal will be filled with water like a Kaem Ling at times of high tide. When the sea level drops below that of the water in the canal, the Watergate of the canal is opened so the water can flow by gravity.  Water can also be pumped out to the sea from the Kaem Ling at the lowest points of those canals. By allowing water to be flowing down these canals at all times, the level of flooding will be reduced. When the sea level rises above that of the water in the canals, the Watergates are closed to prevent water from flowing back into them. This is based on the principle of one-way flow.