The Chaipattana Foundation provides assistance when natural disasters strike. Besides necessary basic infrastructure, such as housing, water and electricity, various activities had also been carried out to extend aid programs and restore occupations for the victims in the aftermath of the disasters. The natural disaster relief & recovery projects under the Chaipattana Foundation strived to leave nobody. 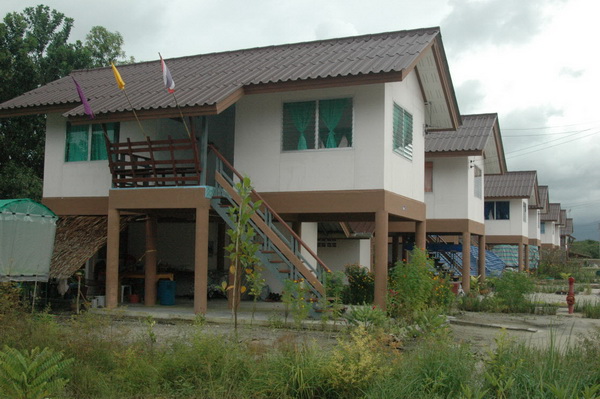 The 2004 Tsunami had caused severe damage to the local residents of Kuburi district. Her Royal Highness Princess Maha Chakri Sirindhorn commissioned the Chaipattana Foundation to respond promptly responded to the disaster by building a housing village, including basic infrastructure and a waste water and solid waste disposal system.

After the disaster relief, the Chaipattana Foundation also helped the victims with occupational restoration. Since they relied predominantly on fishery to make a living, small fiberglass fishing boats were built by using fiberglass material to replace the damaged fishing boats and distributed to the victims. An occupational group was formed to help the victims make their ends meet. At the same time, the Chaipattana Foundation carried out activities for public health services as well as education.

Furthermore, various projects such as the Thai Sea Natural Resources and Environmental Restoration Project, and the Sea Turtle Nursery Project and the Inseminated Crab Bank Project also cover the areas of the natural resources, environmental preservation and restoration, and vocational support. 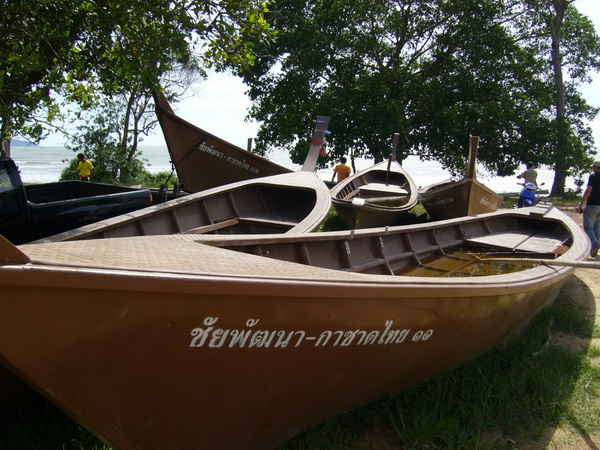 The 2004 Tsunami disaster had devastating impacts on 6 provinces in the South of Thailand. Tragically, it claimed many lives and caused mental and physical damages to many survivals.  The horrendous waves not only took away their loved ones but also their homes and occupations. Most of the local residents, who made a living in fishery, saw their fishing boats destroyed beyond repair. In response to the disaster, the Chaipattana Foundation had resolved that it was one of the urgent tasks to replace more than 3,000 lost and damaged fishing boats for the affected residents. However, a great demand for woods to build the boats would require the import to a certain extent, and could cause deforestation.

To provide them with more durable alternatives to traditional wooden boats, Her Royal Highness Princess Maha Chakri Sirindhorn requested that the Chaipattana Foundation work hand in hand with the Department of Fisheries, the Navy Dockyard Department and the Ayutthaya Shipbuilding College to build small-sized fishing boats of 10 meters, called Hua Tong, from fiberglass. After the successful trial, the requests for the boats were overwhelming.

Her Royal Highness then asked that the Chaipattana Foundation and the Thai Red Cross Society provide budget for the Fiberglass Fishing Boat Project. In collaboration with the Ayutthaya Shipbuilding College, the Department of Fisheries and the Navy Dockyard Department, the Chiapattana Foundation implemented the Project by building 60 small fiberglass fishing boats entitled Chaipattana-Thai Red Cross. This Project was set up at the Vocational College in Thai Muang, Phang Nga province, and the Navy Dockyard Department, Bangkok. The construction took 45 days. Later, 36 of them were handed over to the representatives for the six provinces to test their efficiency, to improve the design and to weigh the ballasts. After they were approved, 500 more were built by the well trained inmates of the Department of Correction. The training gave them an opportunity to contribute to a good cause, as well as vocational skills that would be useful for their future.

The boat management fund group was planned to be established to provide the fishermen with adequate budget for the boat maintenance and the occupational development. Krung Thai Bank and the Bank for Agriculture and Agricultural Cooperatives were responsible for the financial management of the group, while the Department of Fisheries and the Ayutthaya Shipbuilding College were incorporated into the Project to help take care of the shipbuilding technology and development.

On May 12, 2005, Her Royal Highness also granted an initiative to the Office of Vocational Committee to consider launching a fiberglass boat building curriculum in any colleges located around the Andaman coast to produce fiberglass boat experts.

The utilization of fiberglass fishing boats has been followed up occasionally and maintenance instructions have also been provided. The old and unusable boats have been used as a road building material or transformed into artificial corals to manage the fiberglass waste problem. 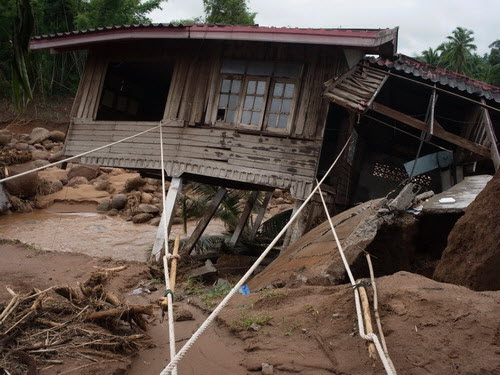 On May 23, 2006, unusually heavy rains at the start of the monsoon unleashed flash floods and mudslides in Northern Thailand which killed at least 34 people, left dozens missing and thousands homeless. Uttaradit, 500 kilometers north of Bangkok, was the worst hit province where a large number of residents were killed.

Because a major part of the soil structure in the North is comprised of mud, and because the local residents in the affected areas conduct the mono crop style of agriculture, when a large amount of rainwater mixed with mud, the top soil was easily eroded.

As soon as Her Royal Highness Maha Chakri Sirindhorn learned about the plight of Uttaradit residents, she requested that the Chaipattana Foundation provide immediate relief. Inspection had been conducted to gather information for the relief and recovery mission. A meeting with the concerned agencies in Uttaradit province was held to determine the relief plan. 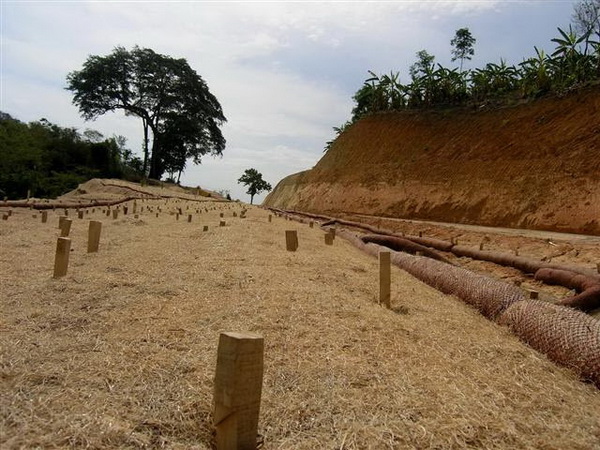 Even though the immediate relief was provided, the Chaipattana Foundation continued the work to cover the prevention of soil erosion.  This gave birth to the Soil Blankets and Cushions for Top Soil Conservation and Environmental Restoration Project, sponsored by the PTT Public Company Limited.

The soil blankets and cushions were made from natural materials. The palm bunches were spun to create filaments. Then, they were woven and transformed into blankets and cushions. Their thickness depends on the soil conditions. These natural tools would disintegrate and dissolve without producing negative impacts to the environment. This method was successfully applied in Japan and USA.

The trial areas were chosen to fit local conditions, including deep slopes, water channels and canals. The blankets would help increase the moisture in the top soil. The cushions would also help slow down and direct water directions.

In October 2010 many parts of Thailand encountered severe flooding which lasted for many weeks. Thousands of homes and massive farmlands had been severely damaged. The flooding had also claimed many lives.

Following His Majesty the King’s call for flood relief, the Chaipattana Foundation began to provide necessary assistance for the affected areas. Under Her Royal Highness Princess Maha Chakri Sirindhorn’s Initiatives, the Chaipattana Foundation also launched a Flood Mitigation Project in order to relieve the plight of flood victims and help them to return homes and resume their normal lives as soon as possible. At the same time, efforts were made to enhance and develop the confidence and self-reliance of the affected communities. 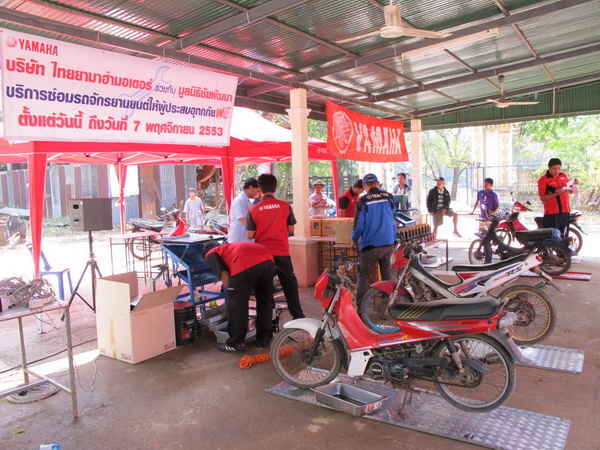 The Chaipattana Foundation began the implement of the Flood Mitigation Project by conducting flood inspections in the affected areas covering 6 provinces of Lopburi, Saraburi, Nakorn Ratchasima, Pichit, Chaiyaphum and Kanchanaburi. Repair centers for motorcycles and small-sized agricultural machines were set up to help affected farmers to resume their farming. As the water level receded, the Chaipattana Foundation set up flood mitigation mobile units to help restore the agricultural areas for farmers. Rice, legume and vegetable seeds granted by Her Royal Highness were distributed to the villagers. Natural manure was also delivered to the agricultural areas to help improve the soil conditions. The Chaipattana Foundation also provided affected farmers with occupational consulting services.

In recent years, the Chaipattana Foundation had implemented royally-initiated restoration projects in response to natural disasters, including the 2004 tsunami in the south, the 2006 mudslide in the north, and the 2010 floods. The main purpose of these projects was to provide support to the victims to re-establish their social and economic structures in the aftermath of the disasters.

Concerned about the suffering of the people caused by the current flood crisis, Her Royal Highness Princess Maha Chakri Sirindhorn requested that the Chaipattana Foundation Aid and Restoration Centers for Flood Victims be set up to shelter flood evacuees and distribute aid including medical services to flood-affected residents. 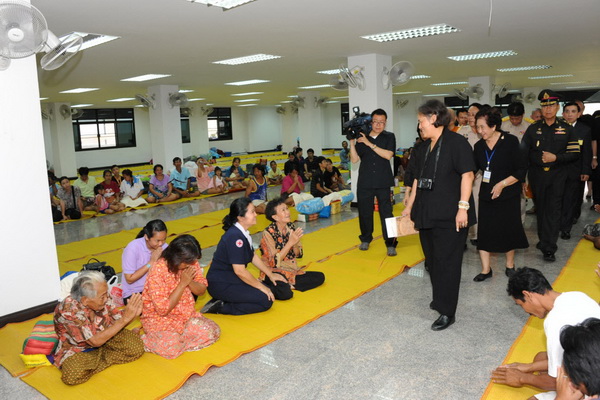 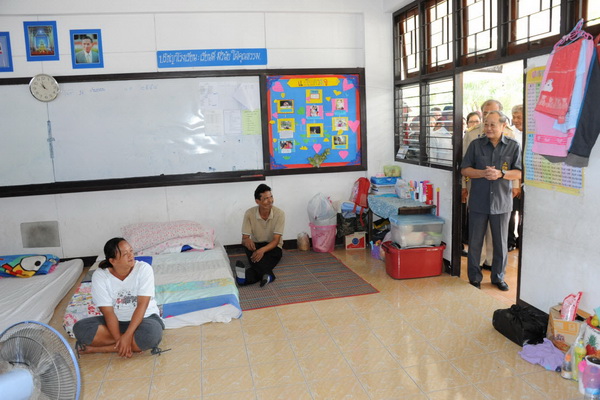 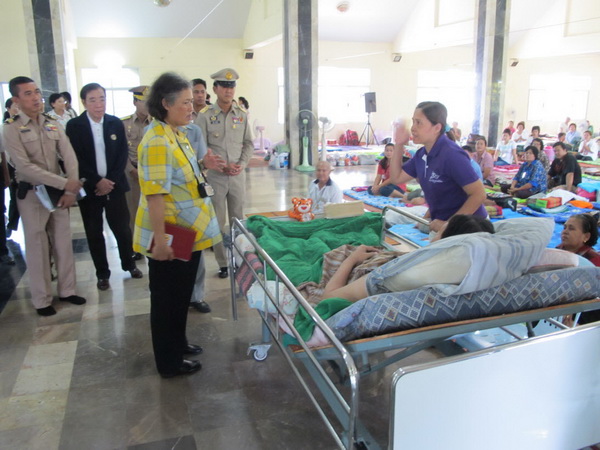 The Chaipattana Foundation Aid and Restoration Centers had been operated around the clock by staff assigned from the Chaipattana Foundation’s central office in Bangkok. Supported by the Royal Thai Army and the Department of Fisheries, aid workers and the official staff also traveled by boat on a daily basis from the Centers to distribute royally-granted survival kits and other donated necessities to affected local residents who are unable to be evacuated from their flooded homes.