Concepts and Theories on Soil

In Southern Thailand, soil acidity was considered a serious problem for agriculture. It was caused by flooding which led to swamp soil that became strongly acidic after the water dried up.

In early 1970S, His Majesty the King had traveled every year to Daksin Palace in Narathiwat province for a temporary stay and to perform his duties in relation to the royal projects.  As a result of these regular visits, His Majesty acquired knowledge and better understanding about local problems, particularly flooding and soil acidity. In order to improve soil conditions in the aftermath of the flooding, His Majesty began to seek an approach to soil acidity.

This prompted His Majesty’s initiative on Klaeng Din (tricking the soil or soil aggravation) as a remedy for the problem. The method consists in alternately drying out and wetting the land to accelerate the soil’s chemical reaction and raise the acidity to the maximum. The soil is then de-acidified through various techniques such as controlling the ground-water level to prevent the release of sulphuric acid, applying liming materials at 1-4 tons per rai, and washing away acidity with water. Selected crops are then introduced. His Majesty’s techniques have turned wastelands into arable farmland.

Another method initiated and developed by His Majesty to improve soil is to grow vetiver grass.

Known in Thai as ya faek, the plant is an indigenous Thai plant, long lived and grows in a dense clump. The leaf is linear with pointed tip, 35-80 centimetres long and 5-9 millimetres wide.  It propagates by both asexual reproduction, though tillering, and sexual reproduction, and by producing flowers and seeds. Vetiver grass is therefore not a weed like cogon or lalang grass (Imperata cylindrica).

The plant has deep root system extending vertically into the soil in a dense cluster. It also forms a wall which efficiently traps sediment and preserves topsoil. Upon his recognition of these properties, His Majesty asked that studies and experiments be conducted on the use and cultivation of vetiver grass

“Vetiver grass should be grown. It is very useful in helping to hold soil together and prevent erosion. The grass preserves the topsoil…and helps retain organic elements. Young leaves of the grass also can be fed as food to animals.”

His Majesty the King’s remarks on vetiver grass

After establishing the benefits of growing vetiver grass, His Majesty introduced several methods to make the most effective use of the grass, including planting vetiver grass along the contours of a hill, using the grass to prevent erosion in gullies, planting it on steep slopes, and using the grass to conserve soil moisture. The success of these initiatives has been recognized around the world and prompted the International Erosion Control Association to present His Majesty with an International Merit Award for excellent work as a soil and environment conservationist.  Regarding soil improvement, His Majesty once said of his concept that:

“The key idea is to conserve the topsoil which is rich in nutrients. It should not be peeled off. Existent perennial trees should be preserved to maintain the moisture in the soil.”

Due to his initiative on vetiver grass as well as his contribution in helping to promote the use of it, Thailand has become one of the world’s most successful and progressive hubs for the study and planting of vetiver grass. 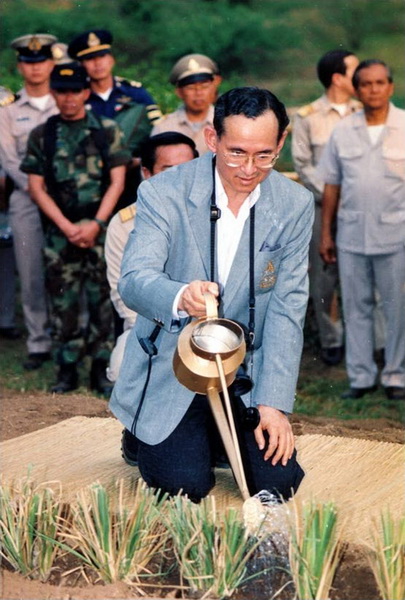